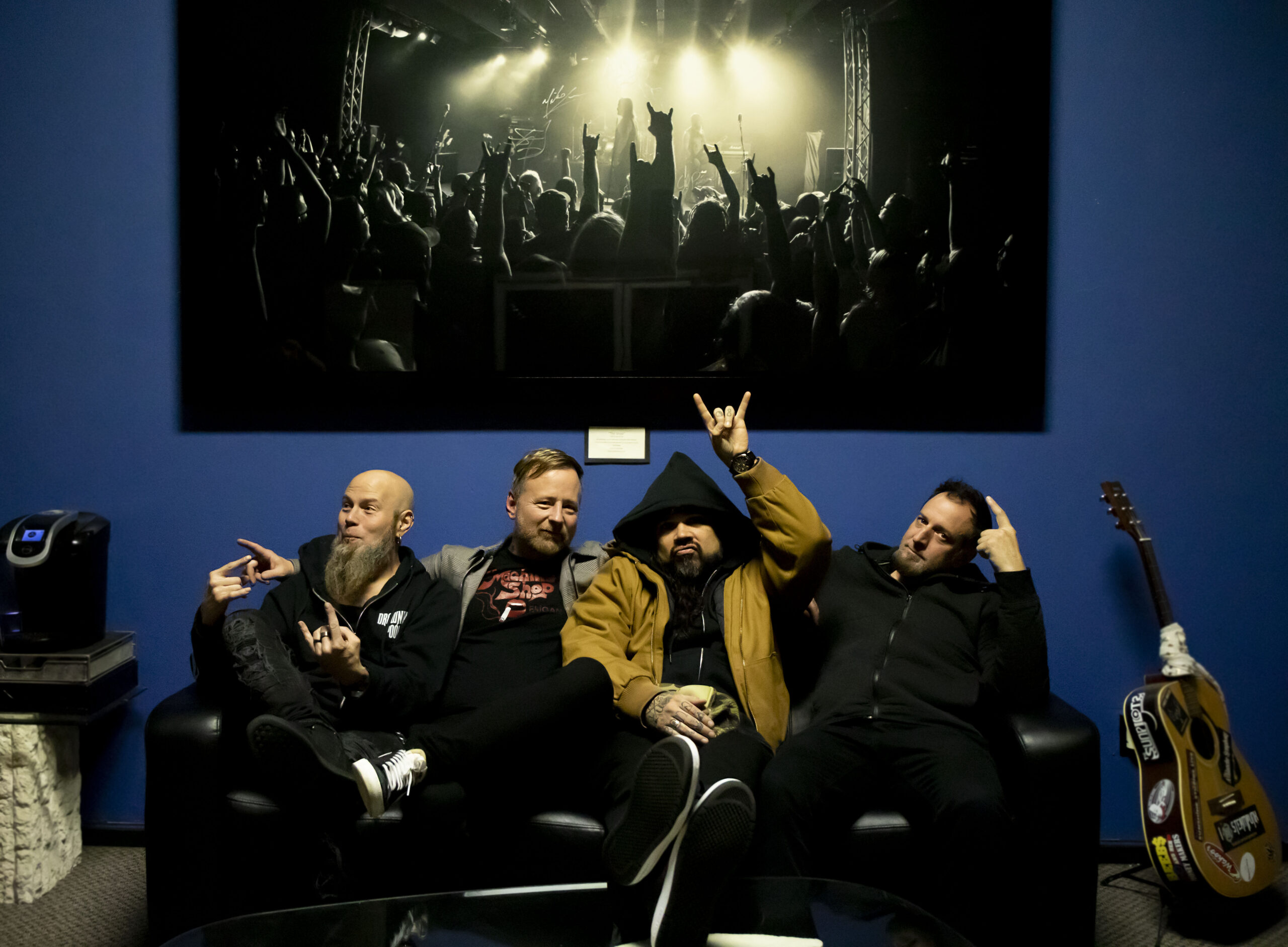 If it seems like the guys in Drowning Pool have a chip on their shoulders, they’re entitled. Actually, we’re all a little entitled lately, which Is what makes Strike A Nerve the most rewarding album of a career spanning 20-plus years, seven studio releases, a platinum album, two gold records, and one of the most recognized rock anthems of the new millennium.

Drowning Pool have long been hailed as champions of blue-collar hard rock and metal, not just because of their consistently incendiary live shows and vastly underrated catalog, but because of the trials and tribulations that have marked their career. They aren’t unique in that regard. What they are is resilient, their everyman, working-class ethos and stubborn perseverance creating a bond few bands ever realize.

Nearly a quarter-century after starting together as a trio, founding guitarist CJ Pierce, drummer Mike Luce and bassist Stevie Benton remain together. They haven’t separated, so they can’t play the reunion card. And at the helm of the band for the past decade, Jasen Moreno is not only Drowning Pool’s longest tenured frontman, he’s also the band’s first singer to record three studio albums. As anyone that has seen the band in recent years can attest, there is magic when the four guys share a stage.

While that magic resonates throughout Strike A Nerve, don’t make the mistake of thinking that the past decade has been easy. The new album was inspired by wearing life’s battle scars on our sleeves, and those bumps and bruises got magnified during the worldwide Covid lockdowns. Lockdowns that started mere months after Drowning Pool completed recording, mixing and mastering Strike A Nerve, an 11-song tour-de-force through the torn and battered psyche of a band. But who among us can’t relate to carrying some emotional baggage?

Written and recorded before the pandemic that halted the world in its tracks for more than two years, Strike A Nerve became more poignant with its time on the shelf. Life is funny like that. We live in a world that’s been hammered with no relent. Disease. War. Racial tension. Skyrocketing fuel prices. Inflation. The insanity of celebrity. The hypocrisy of politics. If you think we’ve lost the plot, you’re not alone. Consider this 42- minute powder keg from our favorite sinners from Dallas, TX, a form of group therapy.

“Is this really all we have, perversions of our truth,” sings Moreno on “Hate Against Hate,” a song born of inner rage that has evolved into a universal truth we are all living.

From the opening strains of “Doing Time In Hell,” through bangers like “Choke,” “Rope”and “A Devil More Damned,” Drowning Pool have scaled masterful new heights with this seventh studio release, the band’s first album for new label UMe/T-Boy Records, and their first-ever major label offering. But the major label hasn’t softened them.

Truth be told, they wrote, recorded, mixed and mastered this album withou  a record deal, fully prepared to release Strike A Nerve on their own after their last few turns through the music industry gristle mill. Fate intervened when Andy Gould – the man responsible for launching and/or forwarding the careers of White Zombie, Pantera, Guns N’ Roses, Rob Zombie and Linkin Park, to name just a few – heard the finished album and introduced it to his colleagues at Universal Music. Drowning Pool dance in the same dark corners that made them hard rock-inspired innovators in the era of nu-metal, but now their penchant for darkness eerily mirrors our everyday world. And now they have a record label that didn’t ask them to change a single note, lyric or song. Their path led them here.

The title track and “Racing To A Red Light” are mid-tempo burners like we haven’t heard from Drowning Pool before, the band’s heightened sense of melody coupling with white hot hooks and irresistible choruses. “Can you hear an empty stage, can you hear tomorrow rage… I can’t go forward because I can’t be heard,” Moreno testifies on “Strike A Nerve” – again, a song written and recorded years before the world careened into its current state. “Stay And Bleed” and “Down In The Dirt” are instant Drowning Pool classics, their punishing grooves making the jarring and somber ballad “Everything But You” even more impactful: “I hate everyone and everything, but you…” From the softest song the band has ever recorded, to their heaviest in album closer “Mind Right,” an homage to their hometown friends and brothers Pantera.

On one level, “Bodies” made Drowning Pool a household name upon the release of their Sinner debut in 2001. But as the album approaches double-platinum status, it was the years that followed that forged the band we hear today. Moreno, Pierce, Benton and Luce have been hardened – sometimes in a good way, and sometimes in a bad way. Just like life hardens all of us. Which is what makes Strike A Nerve so damn special. It’s an album more than twenty years in the making, and it’s an album that will, to be on point, strike a nerve…